The hottest area in the pharmaceutical industry is cancer drugs, in a market worth approximately $30 billion a year or more in the next decade. Development has been in the area known as immunotherapies or immune-oncology. There are drugs that help take the brakes off the immune response, going after solid tumors like melanoma and lung cancer, and customized treatments that modify immune cells to combat blood malignancies.

There are 374 experimental cancer drugs in mid-stage trials, according to the IMS Institute for Healthcare Informatics’ global outlook report published last year. The costs are steep. Most of these drugs have annual costs of $150,000, and a slate of personalized treatments are expected to carry even higher price tags. Keytruda will cost about $150,000, or $12,500 a month, according to The Wall Street Journal. To use a baseline, Bristol Myers’ PD-1 drug Opdivo, which received Japanese regulatory approval in July, is going to cost the equivalent of $143,000 for a full year of treatment.

Cancer is a big business. Ziopharm Oncology Inc. surged 52.3% to $8.66 on Wednesday after the company said it reached a licensing agreement with the University of Texas MD Anderson Cancer Center to develop cancer drugs. The stock was the most actively traded on the Nasdaq premarket, with volume of nearly 900,000 shares, or about 70% of its 10-day average.

For the money, these new drugs are supposed to extend lives by years, rather than months, though none of these drugs offers an outright cure. Companies are pushing related immune-oncology drugs through their pipelines that will be used in combination with one another. While their drugs have only shrunk tumors in about 30% of the population, combinations may help broaden their use even though safety studies are not done on these combinations. Oncologists are so used to the heavy toxicity of their treatments, and the damages they do that they do not stop twice to think of combining toxic drugs.

“Conventional chemotherapy and other cancer drugs often have a powerful effect in shrinking tumors, but the effect is typically short-lived. The effect of immunotherapy can last much longer because the immune system has effectively been reset to remember how to keep fighting cancer cells.”

Perhaps it is not such an advantage to be rich. They get so easily hoodwinked by oncologists who do not pay attention to the broad needs of their patients who gobble down these expensive medicines. Despite unfounded concerns about potentially dangerous interactions between cancer treatments and herbs and other supplements, most cancer doctors do not talk to their patients about these safer products, which can help reduce the toxicity and increase the chances of recovery and cure.

Fewer than half of cancer doctors — oncologists — bring up the subject of herbs or supplements with their patients, researchers have found. Many doctors cited their own lack of information as a major reason why they skip that conversation. “Lack of knowledge about herbs and supplements, and awareness of that lack of knowledge is probably one of the reasons why oncologists don’t initiate the discussion,” said the study’s author, Dr. Richard Lee, medical director of the Integrative Medicine Program at the University of Texas MD Anderson Cancer Center in Houston.

Many are their excuses for their lack of awareness but the principle one remains their erroneous belief that natural supplements contain active ingredients that might cause harmful interactions with standard cancer treatments. Though there may be some natural substances that might interfere to one degree or another with harsh chemo and radiation treatments there are many, like sodium bicarbonate, that are actually used to reduce toxicity of these treatments, but when thought of as a powerful anti-tumor supplemental agent it is shunned completely. Except of course by real medical scientist who do know better after decades of research into the use of sodium bicarbonate (baking soda) as a medicine.

So wide, like the Grand Canyon, is the divide that separates them from safer and less expensive natural treatments that they throw the baby out with the bathwater when they discard bicarbonate as a medicine and vital supplement. However, 59% of oncologists said they had no education on natural supplements, obviously because they do not want to read about such things. When asked about a hypothetical patient with a curable form of cancer, 80% of the oncologists surveyed said they would actively discourage the use of an unknown herb with chemotherapy. Considering just about every substance in the natural world is unknown to them it makes no sense to rely on oncologists to be responsible for all the components of a secure cancer treatment program.

Cancer patients can unlock the power of their own immune systems to shrink their tumors with immunotherapy drugs. However, it is also true that these supplements and herbs, that oncologists reject, can do the trick of putting afterburners on cancer treatments. Patients can choose between expensive medicines that can either train your immune cells to recognize and attack cancer, or boost your immune system, or natural ones that do not come with such heavy toxicity that is often eventually fatal to the patient.

Quitting smoking and reducing exposure to radiation and carcinogens, is thought of as critical for successful cancer treatment but oncologists keep the blinders on when it comes to the carcinogenic nature of modern oncology’s chemo and radiation treatments and tests. “Everything we know about altering lifestyles to prevent cancer from the environmental point of view we absolutely need to continue doing,” says Christian Tomasetti and Bert Vogelstein at Johns Hopkins University.

Nelson Hultberg writes, “Pernicious drugs dominate our lives today like restrictive manacles control a southern chain gang. We are prisoners. And it’s not evils like cocaine and heroin that are the real enslavers; they control but a pittance of people. The real chains around us are fashioned by the thousands of pharmaceutical drugs that spew forth from Big Pharma’s loathsome peddlers, pushing insidious addiction into the veins of our citizens via a naïve medical profession’s complicity and paradigmatic falsity.”

Hultberg believes that almost all degenerative diseases (such as arthritis, diabetes, cancer, coronaries, etc.) are of one origin. “They do not have separate causes. They stem from a deeper deleterious condition, which is what we must concentrate on if we are ever to genuinely cure the specific ailment involved. Eradicate this deeper deleterious condition, and its outward manifestation disappears.” 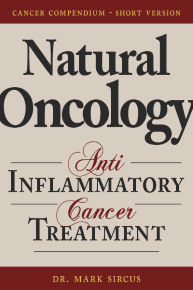 These are my principle books on cancer and its treatment. Surviving Cancer is a 2,500-page compendium but for oncologists on a tight schedule I published Natural Oncology, which is a shortened version. Sodium Bicarbonate is a basic and most essential subject for oncologists and ignorance about this rich man’s poor man’s cancer treatment is not excusable. Anti-Inflammatory Oxygen Therapy is another essential subject for oncologists and just about everyone else interested in healthy living or is recovering from cancer or other diseases. Medical marijuana is playing a vastly more important role in cancer treatment as research continues to show.

My Natural Allopathic Medicine protocol for cancer and other illnesses is multi-dimensional attacking the condition of cancer from every side at once. The costs per year, including the medical equipment needed like a Far Infrared Biomat, are much lower.

Live Oxygen equipment and PEMF device, which can be used and last a person for many years is much less than one month’s cost on these designer drugs, which only the rich can afford. Through the years, I have had many people write who have used only the basics of my protocol and their costs for treatment for a year cannot be higher than a week’s cost on these new drugs.

There is no excuse not to use sodium bicarbonate. It can be used as a supplement, and is legally a food product (GRAS: Generally Recognized as Safe) sold in supermarkets. Sodium bicarbonate is also a hard line drug used in emergency rooms and intensive care wards. To not know about the wonders of bicarbonate is to not know much about the basic practice of medicine, which is how it is in the field of oncology.

Moreover, there is no excuse not to use medical marijuana in all its forms as a major form of safe and effective chemotherapy. Oncologists can rationalize all they want about their unfamiliarity but it does not change the fact that their ignorance translates into premature death for their patients.

Learn more about Cancer with...