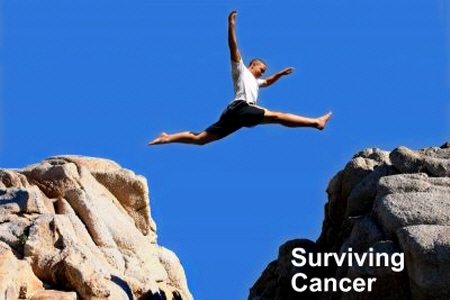 My name is Annmarie and I’d like to thank you for your research and for making it available to us. My children were able to enjoy another summer with their grandfather, 74, who had been diagnosed with 4th stage kidney cancer last November, and we give glory to the Lord for helping us to find your Sodium Bicarbonate book, which we believe helped save his life. My father-in-law was declared cancer free this past May! We spent two weeks with him in northern Wisconsin boating and fishing and just enjoying spending time with him. I thought I would share this good news with you!

I have been getting letters mirroring the medical conclusions I am making at the end of years of research. I am very happy to announce that I have a cutting-edge protocol that addresses cancer in a take-no-prisoners approach. The Natural Allopathic Medicine Protocol is aggressive in penetrating down into the deepest roots of physiology and pathology of cancer but it does so gently because it uses safe, nurturing substances—some of which can save a life in a heartbeat.

My mother recovered two years ago from cancer using bicarbonate and maple syrup. She had a tumor 4 inches across and 10 inches long, which punctured her lungs twice (how it was discovered). She had grade 3b non-Hodgkin’s lymphoma. Took her three months but she did it. Many thanks for writing your Sodium Bicarbonate book and being instrumental in helping saving my mum’s life.
Vince Barnes

Through the years I have put together the remarkable evolving protocol that is successfully treating people around the world for cancer and other diseases. As I have come to the final stages of my research I have made some remarkable discoveries that add insurance that people can beat their cancer and other diseases with increasing ease, in the comfort of one’s own home, inexpensively and with non-toxic means.

With the advances I have made in the last few weeks and with certain breakthroughs in terms of legality and availability of key medicines, I can proudly get up on stage and shout through the PA system that I have something everyone wants and needs—a cure for cancer! (I will qualify this statement two paragraphs below.)

I read most of your work and attribute much of my surviving cancer to you Sir. Please don’t be modest, I know you are standing on tall shoulders, but you carry the message into hell better than they do! The God in me, salutes the God in you Dr. Mark Sircus!

Jill Clarkson is right. I am standing on some tall shoulders, thanks to doctors like Dr. Max Gerson, Dr. Augosto Vinholis, Dr. Alan Greenberg, Dr. David Brownstein, Dr. Jerry Tennant, Dr. George Georgiou, Dr. Rashid Buttar, Dr. Boyd Haley and many others who have personally allowed me to stand on their shoulders and jump higher. I could keep listing doctors—like Dr. Bert Berkson who is responsible for the FDA-sanctioned work with intravenous ALA with liver and pancreatic cancer—I could go on and on. The point is that when one digs deep enough one comes up with the startling conclusion that cancer and most other diseases are understandable, preventable, treatable and curable.

There Is No Single Cure for Cancer!!!

We know it can be cured because people survive cancer all the time. In reality there are many cures for cancer, or more accurately said, there are many things that help us win the war against cancer. Many substances have been studied and have been shown to help reduce cancer growth.

Medical marijuana is known to reduce tumor growth and in the next few years we are going to see many more people using cannabinoid medicine to treat cancer. In fact there is going to be an explosion in the use of marijuana in medicine because Cannabidiol(CBD from industrial hemp) has just become available. It’s legal everywhere because it has no THC. With all the scientific evidence already out there one would be foolish not to use CBD in their cancer treatment.

A pair of scientists at California Pacific Medical Center in San Francisco announced their discovery in September of 2102 that Cannabidiol (CBD) a compound derived from marijuana stops metastasis in many kinds of aggressive cancer, potentially altering the fatality of the disease forever. They found that Cannabidiol turns off the ID-1 gene that causes cancer to spread. These researchers started with breast cancer but found, “Cannabidiol works with many kinds of aggressive cancers—brain, prostate—any kind in which these high levels of ID-1 are present. We’ve found no toxicity in the animals we’ve tested, and Cannabidiol is already used in humans for a variety of other ailments,” said Dr. Pierre Desprez.

When doctors ignore life fundamentals (hydration, salt and mineral levels, pH, oxygen levels etc.) for any reason they are decreasing the chances of a person recovering from their disease.

I do take sodium bicarbonate orally with iodine as well, as you suggested. This is the most successful regimen I have ever been on. I am confident for the first time in many years that I will live… and my doctors told me in 2008 to get my affairs in order.

I would love to meet you some day and thank you in person. I believe in your work and they way you help so many thousands of people.

Cancer is a billion dollar racquet! In November of 2010 my daughter was diagnosed with breast cancer. She’d had the lump for quite a while and afraid to get it checked. By the time she finally did, the tumor was large enough that it was visible when she wore a t-shirt. They did tell her she was lucky because she had the slowest-growing type of cancer. She was going to start chemo in December. I found Dr. Sircus’ website, we e-mailed back and forth a few times and I discovered that he would consult with her, explaining his protocol, and guide her through it. Naturally she was petrified. I had to beg long and hard enough that finally she agreed to “try it.”

We’re 1,000 miles apart and I couldn’t leave home to be with her through this, although her sister was with her every step of the way. We talked on the phone daily. Her overall health began to improve almost immediately and in a few weeks she claimed she hadn’t “felt this good in years.” More energy than she could believe, was getting constant compliments from customers in the store where she worked about how beautiful she looked, how healthy and shiny her hair was, beautiful complexion, etc. They didn’t know she had cancer, had just noticed all that improvement in appearance. Never missed a day’s work, and even worked on off days in a little shop she and a friend had opened.

In a few months the tumor had shrunk to where it was no longer visible (she told me where it had protruded out it resembled an egg lying sideways). Finally, she couldn’t even feel it by pressing in that area. She went back to the oncologist to have an ultra-sound to see if there was any more sign of it. Lo and behold, she was told that not only was it not gone, it had enlarged! Oh? Well why isn’t it visible or palpable any more? Because it moved! I tried over and over to remind her that tumors don’t move. They colonize in the tissue where they begin. They may metastasize or enlarge or shrink but they don’t move! They’re lying! She couldn’t seem to hear that.

She went with her sister and all the test results, etc. to another oncologist who informed her that according to the X-rays, she originally had two tumors. She was never told that. That the large, visible one had disappeared and she was in prime health didn’t seem to penetrate. It seems the fear overwhelmed her ability to reason logically.

The oncologists promised they were going to get her better by using the “biggest guns they had” or something like that. She caved in to their promises; went through two rounds of chemo, twice a week I believe for 8 weeks at a time. Lost her hair (they promised she would). During the 2nd round they gave her a shot before each dose of chemo ($3,700 per shot) to “jump start” her bone marrow to produce more white cells, even though the cell count was healthy each time. The long-range effects are constant joint pain so she’s on pain medicine daily. Then 30-some doses of radiation, pinpointed to 6 or 7 areas (to mop up any cancer cells that may be floating around, although it’s a known fact that radiation causes cancer). They actually told her that she could get cancer if the radiation hit a certain area (this part is vague in my memory).

They also did several biopsies of her lymph glands under her arms. The last one they did they removed several of them because they “looked suspicious.” If they were it was undoubtedly from all the radiation. Only after they removed them was she informed of the risk. She was told that there are certain of the glands that if they went too far and even nicked one of them that she could end up with elephantiasis. She has to be very careful and not get bumped or injured and it could happen any time—even years afterwards.

Incidentally, she told me that just about every time she saw the oncologist he would say, “I don’t know what you’re doing, but keep it up!” He was amazed at her level of health. She told him what she had been doing, along with the supplements Dr. Sircus had suggested. However, she totally stopped the regimen when she started the chemo. So far she’s okay today, although without the vital health she was experiencing before all the chemo, surgery and radiation, and without her breasts. She’s on disability and works one day a week to keep her insurance.

This was difficult to write, bringing back the emotional stress and fear for her life. If it will help someone make a decision for a healthy cure rather than the cure-that-kills, it will be worth it. Dr. Sircus’ protocol worked miracles for my daughter. Please keep her in your prayers.

Readers who need to look beyond the words and testimonies of others to something more rational should read my essay Divine Cancer Mathematics. There you will find numbers for many of the substances that populate the core of the Natural Allopathic Medicine protocol for cancer. I named that chapter the way I did because it started out as an inspiration. The chapter could easily be called Rational Cancer Mathamatics or Obvious Cancer Mathamathics.