In the State of the Environment Report for 2015, we read that Hundreds of thousands of people in the E.U. — perhaps millions, if present trends continue — will suffer premature death in the next two decades because of toxic air. The European Environment Agency (EEA) blames governments for inaction and says that in 2011 alone — the most recent year for which there is a reliable tally — over 400,000 Europeans died prematurely from air pollution.

This video went massively viral as tens of millions of Chinese watched, gripped and outraged  watching this 104-minute video entitled "Under The Dome" exposing the ugly truth about Chinese air pollution. What is perhaps most stunning is that the Chinese government, so far, has not shut off the documentary, and recently appointed minister of environmental protection, Chen Jining, even praised the video.

More than half of people born after 1960 in the U.K. may be diagnosed with some form of cancer in their lifetimes, a report in the British Journal of Cancer suggests though we rarely read that living and breathing in cities with polluted air causes cancer.

Global warming experts could give a hoot for the nasty side of air pollution; they are only interested in condemning the healthy stuff (carbon dioxide) that is put into the air by us humans. The plants just gobble the stuff down making the forests grow faster. Everything and everyone is healthier with more CO2 but the rest of what we put in the air is deadly. The problem with coal burning is not CO2 but the massive amounts of mercury, about 20 tons each day that is put into the air. It is a deadly neurological poison. One drop pollutes an otherwise pristine lake.

There is some justification for changing the way we live on our planet but the people wanting to do the changing have it all wrong. They actually want us to suffer while they get richer and take more power to lord over us. Actually, they want more than that. They want most of us to die  leaving the planet in better condition for them and their families.

We’re living longer, yes, but why not healthier, reads the headline of one essay. One of the principle reasons is that we live on a poisoned planet and those especially in cities, where most of us live, are living in gas chambers. Medical science knows what air pollution does to our bodies but doctors do little to nothing to help their patients’ weather the toxic storms. The air we breathe actually causes cancer. 175 million Americans breathe bad air.

Harvard researchers are reporting strong evidence that prenatal exposure to high air pollution can up to double the chance that a child will develop autism. The results – drawn from the large, nationwide U.S. Nurses Health Study – back those of previous studies suggesting this link. The report appears online today in Environmental Health Perspectives.

How come we never hear that the FDA itself has said that 2 to 3 thousand tons[1] of metallic mercury is being released into the air from manmade sources. Chemical radioactivity is an appropriate phrase to describe what the situation is with mercury and other chemicals that are causing disease rates to soar. Moreover, what has already arrived gets worse with the hundreds of millions of tons of toxic chemicals that get produced and added to the human biosphere each year. Everyone now has to live and breathe in the context of a dangerous chemical cloud with radioactive-like fallout that penetrates our human skin. Having failed to destroy ourselves with radioactive clouds from atomic bombs we have managed to muddle through and threaten ourselves through chemical means.

It really matters where you live. You certainly do not want to live downwind of a coal fired smoke stack like this, not because of the increased carbon dioxide but because of the mercury.

Mercury pollution is making its way into nearly every habitat in the U.S., exposing countless species of wildlife to potentially harmful levels of mercury, a September 2006 report from the National Wildlife Federation shows. “From songbirds to alligators, turtles to bats, eagles to otters, mercury is accumulating in nearly every corner of the food chain,” says Catherine Bowes, Northeast Program Manager for the National Wildlife Federation and principal author of the report. “This report paints a compelling picture of mercury contamination in the U.S., and many more species are at risk than we previously thought. Fish, long thought to be the key species affected by mercury, are just the tip of the iceberg.” People forget all too easily that humanity is also an animal species and the same thing that is happening to these animals is happening to us.

Most of this mercury is coming from coal-fired plants yet global warming fanatics never mention anything but the carbon dioxide emissions that are doing nothing to keep our planet warm with a cooling sun at the center of the solar system. Human destiny is on a collision course with mercury, not carbon dioxide. We have create a chemical hell on earth and doctors make it worse by insisting on using toxic drugs instead of safe and effective natural medicines.

On top of a list of chemicals and heavy metals too long to mention we have the problem of increasing radiation, also sourced by an elite group of people who support nuclear power, nuclear weapons and nuclear medicine. We now have an open nuclear sore on our precious planet at Fukushima but we are told not to worry about it. I have written a book about it because parents should know of the increasing dangers to their children, who are more vulnerable to radiation than adults are. 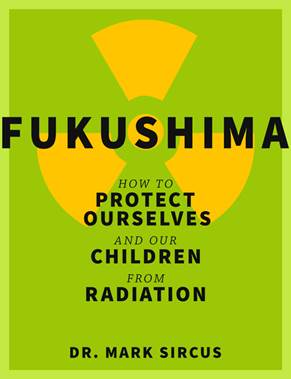 Fukushima is Japan’s and the world’s radiation nightmare that will not go away in our lifetimes nor our children’s or grandchildren’s. The Fukushima nuclear power plant is hemorrhaging radioactive toxic waste into the ocean and air. The main point this book makes is to tell the story about what is really going on and to teach parents what evasive medical actions they can take to protect their children as much as possible.

What is in the Air?

Air pollution occurs when the air contains gases, dust, fumes or odor in harmful amounts, meaning in amounts which could be harmful to the health or comfort of humans and animals or which could cause damage to plants and materials.

Further pollution can arise if primary pollutants in the atmosphere undergo chemical reactions. The resulting compounds are called secondary pollutants. Photochemical smog is an example of this.

Air pollution is also caused by dust from tractors plowing fields, trucks and cars driving on dirt or gravel roads, rock quarries and smoke from wood and crop fires. Tobacco smoke generates a wide range of harmful chemicals and is a major cause of ill health like cancer. It also leads to burning sensation in the eyes or nose, throat irritation, severe asthma and improper lung function. Formaldehyde is an intermediate in the oxidation of methane as well as other carbon compounds, e.g. forest fires, in automobile exhaust, and in tobacco smoke. Its exposure causes irritation to the eyes, nose and may cause allergies in some people. Prolonged exposure of lead can cause damage to the nervous system, digestive problems, and in some cases cause cancer. It is especially hazardous to small children.

Ozone gas makes our eyes itch, burn, and water and it has been associated with increases in respiratory disorders such as asthma. It lowers our resistance to colds and pneumonia. Sulfur dioxide (SO2) in the air is caused due to the rise in combustion of fossil fuels. It can oxidize and form sulfuric acid mist. SO2 in the air leads to diseases of the lung and other lung disorders such as wheezing and shortness of breath. Suspended matter (SPM) consists of dust, fumes, mist and smoke. The main chemical component of SPM that is of major concern is lead, others being nickel, arsenic, and those present in diesel exhaust. These particles when breathed in, lodge in our lung tissues and cause lung damage and respiratory problems.

Special Note. It is not just air pollution but water and food contamination that is having a great impact on humanity. For instance and this is just the tip of a giant iceberg: twenty –five years ago, more than 2,000 people were poisoned by Aldicarb, a highly toxic pesticide used on cotton and several food crops. It was the biggest case of pesticide poisoning in US history. Local officials recommended a ban, to no avail, and Aldicarb has merely been under “special review” with the EPA for more than 25 years.

EPA documents showing that babies andchildren under five can ingest levels of the insecticide through food and water that exceed levels the agency considers safe. For infants, consumption of aldicarb residue – mostly in potatoes, citrus and water – can reach 800% higher than the EPA’s level of concern for health effects, while children between the ages of one and five can ingest 300% more than the level of concern.

“After thousands of poisonings, it is mind-boggling that aldicarb is still in use,” said Steve Scholl-Buckwald, managing director of the environmental group Pesticide Action Network North America. “The wheels just grind so, so slowly. It never should have been registered in the first place back in 1970 and by the mid-1980s there was sufficient data to suggest it should have been taken off the market.”