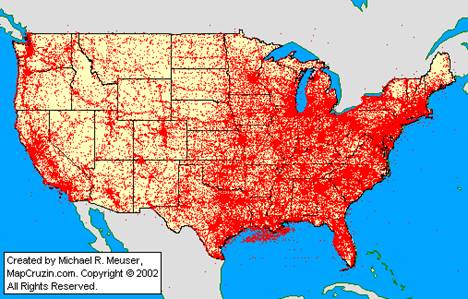 Radio Frequency Antennas and Towers Across the USA.[1]

In a recent scientific study conducted by a team of
researchers from Israel, a possible link between microwave
radiation, similar to the type found in cellular phones, and
different kinds of damage to the visual system was found. At least
one kind of damage seems to accumulate over time and not heal.[2]

In her extraordinary article The Radiation Poisoning of America, by Amy Worthington, we find that studies confirm that non-ionizing communications radiation in the RF/microwave spectrum has the same effect on human health as ionizing gamma wave radiation from nuclear reactions. (This is a must read mind blowing article.) Leading German radiation expert Dr. Heyo Eckel, an official of the German Medical Association, states, ‘The injuries that result from radioactive radiation are identical with the effects of electromagnetic radiation. The damages are so similar that they are hard to differentiate.”

Amy Worthington writes, “Because gamma waves and RF/microwave radiation are identically carcinogenic and genotoxic to the cellular roots of life, the safe dose of either kind of radiation is zero. No study has proven that any level of exposure from cell-damaging radiation is safe for humans. Dr. Carlo confirms that cell damage is not dose dependant because any exposure level, no matter how small, can trigger damage response by cell mechanisms.”[3]

The city of San Francisco, for example, with an area of only seven square miles, has over 2,500 licensed cell phone antennas positioned at 530 locations throughout the city. In practical terms, this city, like thousands of others, is being wave-nuked 24 hours a day. This is the case in cities and towns all over the world. Watch this video with worried medical professionals and neurosurgeons talking about how heavy use of cell phones doubles the risk of contracting malignant brain cancer. Recent Swedish epidemiological studies confirm that, after 2,000 hours of cellular phone exposure, or a latency period of about 10 years, brain cancer risk rises by 240 percent.[4]

This is where we stand today. The public has no vote, no voice,
no choice. Chronic exposure to scientifically indefensible levels of
DNA-ravaging radiation is now compulsory for everyone in America.
Amy Worthington

Worthington continues, “Since the wireless revolution began wave-nuking the U.S. in the 1990s, there have been no federally funded health studies to assess the cumulative effects of ever-increasing communications radiation on public health. There is no national database enabling citizens to study the location of transmitters in their areas. Local and state governments can offer no information on how much commercial wireless radiation is contaminating their populations. When trying to find out who owns a tower or which companies have transmitters on that tower, citizens usually hit a brick wall.”

We can only guess how many people around the world
are in their graves today from microwave assault.

The threats to our health and very survival do not end. Einstein’s words about bees have taken on a life of their own lately. “If the bees disappeared, man would have only four years of life left.” German scientists at Landau University blame cell phones for the astounding disappearance of bees worldwide. Most of the commercial honey bees in the U.S. are already gone; the phenomenon is spreading.” It seems like the plot of a particularly far-fetched horror film. But these scientists suggest that our love of the mobile phone could cause massive food shortages, as the world’s harvests fail. They are putting forward the theory that radiation given off by mobile phones and other hi-tech gadgets is a possible answer to one of the more bizarre mysteries ever to happen in the natural world – the abrupt disappearance of the bees that pollinate crops.

Hang up that phone! Radiation emitted by cell phones kills brain cells in rats. A single 2-hour exposure to the microwaves emitted by some cell phones kills brain cells in rats, a group of Swedish researchers’ claims. If confirmed, the results would be the first to directly link cell-phone radiation to brain damage in any animal.[5] The most basic fact about cell phones and cell towers is that they emit microwave radiation; so do Wi-Fi (wireless Internet) antennas, wireless computers, cordless (portable) phones and their base units, and all other wireless devices.

Meaning our cell phones are cooking our brains! 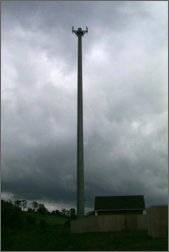 A study by Dr. Bruce Hocking in Australia found that children living near three TV and FM broadcast towers (similar to cell towers) in Sydney had more than twice the rate of leukemia than children living more than seven miles away. According to the Mount Shasta Bioregional Ecology Center, “Studies have shown that even at low levels of this radiation, there is evidence of damage to cell tissue and DNA, and it has been linked to brain tumors, cancer, suppressed immune function, depression, miscarriage, Alzheimer’s disease, and numerous other serious illnesses.” But imagine a physician diagnosing such a thing tracing it back to electromagnetic radiation. In fact we are being bombarded with so many toxic influences simultaneously we have to factor in all of them in our diagnosis and treatment.

So yes even our precious cell phones and wireless systems are going to tear our health down over time so it’s best to eliminate or diminish use to the minimum possible. It was only about two years ago that I threw out my Wi Fi, cordless phone and shut off all the cell phones except when absolutely essential, which fortunately in my case is just about never. But I live about 600 yards from a cell tower, and while that is not that close it is close enough. Many people today are absolutely dependent on their cell phones and the real tragedy waiting to happen will be years unfolding in the lives of our children, who are starting out younger and younger using these powerful transceivers and putting them right up to their brains for hours at a time.

I have written IT MATTERS WHERE YOU LIVE and there are many factors to consider if one is free enough to choose. My original chapter had mostly to do with mercury and how you don’t want to live down wind of any coal fired electrical plant, town incinerator or crematorium; all of which put out heavy concentrations of mercury into the local environment. Sorry to say folks but the northern hemisphere is much more polluted then the southern especially when you factor in things like mercury and uranium. And yes sorry but for the next billion or two years we will have increased levels of uranium exposure from the thousands of depleted uranium weapons already used in northern hemispheric latitudes.

It Matters Where You Live and sometimes we can wish to leave the planet because there is no escaping certain things and microwave radiation is one of them, but so are increasing mercury environmental levels. Where I am building my Sanctuary in Brazil the closest tower is about six miles and it is one of the lowest population densities in the world.

[4] “Long-Term Mobile Phone Use Raises Brain Tumor Risk: Study,” Reuters, 03-31-06. This research was conducted by the Swedish National Institute for Working Life whose scientists studied 905 people with malignant brain tumors to confirm a 240% increased risk of brain tumors after heavy mobile phone use.