So deep are the protective, buffering and neutralizing properties of bicarbonate that it is used even with radiation exposure to protect the kidneys and other tissues. In a world that is already overexposed to uranium and mercury, sodium bicarbonate becomes even more important because mercury and uranium oxide directly attack the nuclear material and mitochondria of the cells.

The oral administration of sodium bicarbonate diminishes the
severity of the changes produced by uranium in the kidneys.[1]

The kidneys are usually the first organs to show chemical damage upon uranium exposure. Old military manuals suggest doses or infusions of sodium bicarbonate to help alkalinize the urine if this happens. This makes the uranyl ion less kidney-toxic and promotes excretion of the nontoxic uranium-carbonate complex. The oral administration of sodium bicarbonate diminishes the severity of the changes produced by uranium in the kidneys.[2]

It does this for all the heavy metals and other toxic chemicals including chemotherapy agents, which are highly lethal even in low dosages. After depleted uranium weapons were used starting in the first Gulf War, the United States has polluted the world with uranium oxide and it is showing up more and more in tests doctors perform. With a half life of several billion years we had better be prepared to get used to dealing with the toxic effects and help our bodies clear it more easily through the kidneys. Sodium bicarbonate is an absolute must item in any field hospital and it should be in used and recommended in all clinics and be present in every home medicine cabinet.

In reality we need a more descriptive image for bicarbonate. Its pharmacological characteristics, even though widely used, are not well understood. What does bicarbonate really do? Well, instead of a muscleman with a mallet, an even better image would be a strong janitor mopping up the messes and carrying the poisons away. This strong janitor protects tissues and leaves an alkaline film or trail behind to make sure everything stays safe. In medicine, sodium bicarbonate is the cleaning and security man proven loyal through decades of faithful service and he can be brought in to provide some sort of protection in cases where people are suffering from radiation toxicity.

So useful and strong is sodium bicarbonate that at Los Alamos National Laboratory in New Mexico, researcher Don York has used baking soda to clean soil contaminated with uranium. Sodium bicarbonate binds with uranium, separating it from the dirt; so far, York has removed as much as 92 percent of the uranium from contaminated soil samples. I started writing about baking soda after discovering that the United States Army recommends the use of bicarbonate to protect the kidneys from radiation damage.

Blaise W. LeBlanc, a former research chemist with the U.S. Department of Agriculture identified the byproduct hydroxymethylfurfural, (HMF) as a potential culprit in colony collapse disorder of bees. LeBlanc has a solution to minimize HMF toxicity: By adding bases (such as sodium bicarbonate, or baking soda, lime, potash or caustic soda) to HFCS, the pH rises and HMF levels drop. Sodium bicarbonate can safely remove paint, grease, oil and smoke residue, decreasing workers’ exposure to harsh chemicals and eliminating much of the hazardous waste associated with other cleaners. “Sodium bicarbonate is able to clean in areas where other substances pose fire hazards, because baking soda is a natural fire extinguisher,” says Kenneth Colbert, a general manager for Arm & Hammer. This is the reason it’s used by oncology centers to control chemo agent spills and its actually used intravenously to protect patients from the hazardous toxicity of chemotherapy. 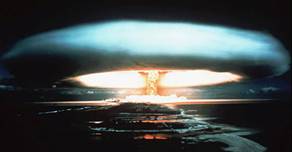 If the bombs start dropping anywhere on earth you will need to have a large amount of sodium bicarbonate on hand. Minimum stocks should be 25 or 50 pounds. You will also need iodine, magnesium chloride, spirulina and a long list of survival items. I am recommending that one stocks up on bicarbonate, which is extraordinarily inexpensive.

Normally I recommend someone start with using one pound of bicarbonate in a bath but that could easily be two or three pounds in an emergency situation. It is not a joke that one can get fifty pounds of the most powerful medicines on earth for thirty five bucks. You will also need a lot of magnesium salts and the very best and most penetrating of them is the magnesium chloride in the form of magnesium bath flakes.

I was able to talk to the folks at LL’s Magnetic Clay Company and for two weeks they will give 40 percent off of their normal retail price for 32 pounds of bath flakes. That translates to 90 dollars for Ancient Minerals bath flakes which come from ancient deep underground deposits that are the purest you can find.

They also sell the Nascent Iodine which I recommend and you will want on hand for yourself and children.  The time to start strengthening your thyroid is now. This is not a scare tactic it is just prudent preventative medicine.

The Magnetic Clay Company obviously sells a lot of clay and this is also very important to have on hand for medical, environmental and nuclear emergencies. Clay baths are a very strong way of removing heavy metals from the body and would increase our chances of survival if exposed to nuclear fallout. Spirulina has been used heavily by the Russians after the Chernobyl nuclear plant disaster. And the Japanese love their miso soup and that was said to help some of their citizens survive the fallout after the Americans attacked two of their cities full of innocent men, women and children. Sadly, it appears that few Americans lost any sleep over it, for it was fully justified in the history books if you can believe any of them.

On Wednesday the 14th of April 2010 four top representatives of the Obama administration told Congress they are urgently pursuing new sanctions on Iran and added that a military strike has not been ruled out. President Barack Obama has said he won’t “take any options off the table with respect to Iran,” Undersecretary of Defense Michele Flournoy said. “Now, that means to me that military options remain on the table.”

Smart people today are preparing for social, economic, climate change and even disaster. There is no longer war without nuclear materials (depleted uranium weapons) being spent on the battlefield as it has already happened in Iraq twice, in Afghanistan, and even in Lebanon. That nasty stuff called uranium oxide is going to be kicking up dust among us for the next several billions years, so get used to it. Being told to get used to it by a psychopath talking to the families of his victims is one thing but being told as I am doing here,  suggests defensive medical preparations and for that you have magnesium chloride, iodine, sodium bicarbonate, spirulina and clay.

The prices listed below are available through LL’s Magnetic Clay at: www.magneticclay.com The special 40% pricing on the 32 lb. size of bath flakes is only available for 2 weeks via the discount code I requested for my readers “imvabaths.” This is a very special offer that I hope you will take advantage of as it won’t be offered at this discount again, anytime soon. IMVA thanks LL’s Magnetic Clay for making this possible. As you can see below the discount is very good.

Dead Sea salt is another option and is slightly less expensive than pure magnesium flakes. It is high in magnesium chloride and also high in potassium chloride. I highly recommend the use of this salt but also recommend that one use the Ancient Minerals in combination to get the magnesium concentration even higher.

[1] A study of the acidosis, blood urea, and plasma chlorides in uranium nephritis in the dog, and the protective action of sodium bicarbonate.