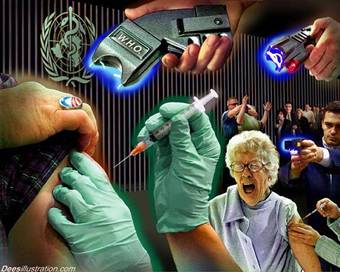 If there’s one thing about the anti-vaccine movement (one bloggers opinion), it’s that it’s virtually completely immune to evidence, science, and reason. No matter how much evidence is arrayed against it, it always finds a way to spin, distort, or misrepresent it to combat the evidence.

I and many other people’s opinion swings 180 degrees opposite: If there’s one thing about the medical establishment’s behavior around vaccines it is it’s virtually complete immunity to evidence, science, and reason. And the evidence is arrayed against the vaccine industry; vaccines do kill children and do cause all kinds of damages but they don’t like to talk about that.

The world is flat to vaccine proponents, they can only see the good they are doing and not the bad. They hide in shame the truth – the statistics of vaccine damages – which are the last thing they want paraded in front of the public. And the CDC itself admits, “The age at which infants begin their primary course of vaccinations (2 to 4 months old) is also the peak age for the incidence of sudden infant death syndrome (SIDS).” Of course they don’t see the connection though and admit it on their official site.

The truth is that last week, “Australia’s chief medical officer Jim Bishop said health professionals should immediately stop immunizing children under five years old with the flu vaccine.  Professor Bishop is concerned about a spike in the number of West Australian youngsters experiencing fever and convulsions after getting the shot.” The day before reading this I was told by a friend of mine here in Brazil of a case where a pregnant woman received the flu shot only to kill her fetus only hours later.

The truth is that U.S. health officials urged pediatricians in March of 2010 to temporarily stop using one of two vaccines against a leading cause of diarrhea in babies, after discovering that doses of GlaxoSmithKline’s Rotarix were contaminated with bits of an apparently benign pig virus.

Vaccines kill children in more than rare occurrences. In 1986, Congress officially acknowledged the reality of vaccine-caused injuries and death by creating and passing The National Childhood Vaccine Injury Act (Public Law 99-660) which requires doctors to provide parents with information about the benefits and risks of childhood vaccines prior to vaccination. Doctors are required by law to report suspected cases of vaccine damage. The Vaccine Adverse Event Reporting System (VAERS) — operated by the CDC and FDA.

As of January 8, 2010 VAERS had received 7814 adverse event reports following 2009 monovalent H1N1 vaccination. Of the 7814 reports, 477 (6%) were reports that were classified as “serious” health events (defined as life threatening or resulting in death). Among the 477 reports of serious health events, there were 33 reports of death. The National Vaccine Information Center (NVIC) reported that, “In New York, only one out of 40 doctor’s offices [2.5%] confirmed that they report a death or injury following vaccination,” — 97.5% of vaccine related deaths and disabilities go unreported there. Implications about the integrity of medical professionals aside (doctors are legally required to report serious adverse events), these findings suggest that vaccine deaths actually occurring each year may be well over 1,000.”

Vaccines are also causing a pandemic in neurological damages with accompanying severe learning disabilities. Medical officials will never admit that and will go to their graves thinking it’s safe to inject babies with Thimerosal, which is fifty percent organic mercury by weight. Thimerosal is the most vulnerable aspect of official medicine, the soft point in all their armor since it’s really hard (but they do a superb job) to defend the deliberate injection of a potent neurological poison directly into children’s blood streams. They fool most of the people most of the time but they don’t fool or confuse millions who know better than to trust arrogant doctors and the medical officials that backstop them.

Sweet little baby beings deserving our pure love are receiving doses of highly toxic chemicals that hold dangers for both immune and nervous systems. What is happening is most reprehensible yet the medical authorities persist to the end insisting that serous reactions to vaccines are rare meaning they are perfectly safe.

Deep within is our pure being that has incarnated into this body.
This being is ultra sensitive. From the moment of conception
this pure being is picking up subtle impressions from
the environment through the heart center of pure feeling.

When we betray the innocent and vulnerable nature of baby’s pure heart we cause hurt. When we are born we have a great capacity to be hurt. Babies and young children are totally at the mercy of their environment, they are vulnerable to their doctors who abuse them with pharmaceutical medicine. When our civilization fails we can at least take solace when medical institutions that are built on hurting babies are crushed. It is sad though that nothing short of a civilization collapse will serve in this regard.