The World Anti-Doping Agency (WADA) has recorded 99 positive tests for the newly banned drug at the center of the Maria Sharapova case. The case has triggered intense interest in meldonium, a hitherto little-known substance, which is available as an over-the-counter medication in many parts of Eastern Europe but not approved for use in the United States by the Food and Drug Administration. Meldonium is used to treat ischemia, a lack of blood flow to parts of the body. The drug is manufactured in Latvia and prescribed to treat heart disease.

The increase in blood flow it produces could improve endurance and recovery time after exercise and WADA moved it from the “monitored” to the “prohibited” drugs list “because of evidence of its use by athletes with the intention of enhancing performance,” the anti-doping body has said.

Long and hard is the search for substances that athletes can use to increase sports performance. There are more than several substances that are natural, legal, non-toxic and safe that athletes can use, but like everywhere else in the world of medicine most still prefer dangerous pharmaceuticals to natural medicinals even with the risk of being discovered and banned from competition.

According to Annelie Pompe, a prominent mountaineer and world-champion free diver, alkaline tissues can hold up to 20 times more oxygen than acidic ones. When our body cells and tissue are acidic (below pH of 6.5-7.0), they lose their ability to exchange oxygen, and cancer cells just love that.

Those in the sports world understand the benefits of taking sodium bicarbonate (baking soda) orally before workouts or athletic events—doing so raises the oxygen-carrying capacity of the blood. One can actually feel the difference in performance—it is that noticeable. One of the limitations of using bicarbonate orally in this fashion is that it can provoke diarrhea during an event if taken in too high dosages. Another limitation is of short duration of the effect.

A report published in 2010 in “Food and Nutrition Sciences” states that athletes who participate in events taking one to seven minutes, such as 100- to 400-meter swimming and 400- to 1,500-meter running, benefit most from sodium bicarbonate. In regard to resistance training, a study published in 2014 in the “Journal of Strength and Conditioning Research” demonstrated a marked improvement in performing squats and bench presses to exhaustion when participants took baking soda compared to a placebo. Studies of elite rowers doing a 2k for time, for example, tend to note no benefit or an insignificant one. Swimming is the opposite; studies using a repeated sprint protocol (either 10 sprints of 50m or 5 sprints of 100-200m) have shown that the decline in performance normally seen with repeated sprints is abolished with sodium bicarbonate.

It is clear that sub-optimum dietary magnesium intakes impairs athletic performance. Studies carried out in 1986/87 revealed that gymnasts, football and basketball players were consuming only around 70% of the RDA of magnesium, while the intake of female track and field athletes was even lower, as low as 59% of the RDA. Evidence shows that a magnesium shortfall boosts the energy cost, and hence oxygen use, of exercise during activities like running or cycling. One study of male athletes supplemented with 390 mg of magnesium per day for 25 days resulted in an increased peak oxygen uptake and total work output during work capacity tests.

Magnesium deficiency reduces metabolic efficiency, increases oxygen consumption and heart rate required to perform work, all things that would take the edge off performance. Athletic endurance and strength performance increase when a large amount of magnesium is supplemented because a magnesium shortfall can cause a partial uncoupling of the respiratory chain, increasing the amount of oxygen required to maintain ATP production. In one study, young athletes supplemented with 8mgs of magnesium per kilo of body weight per day experienced significant increases in endurance performance and decreased oxygen consumption during standardized, sub-maximal exercise.[1]

Studies have shown that supplementing with 30mg of Zinc and 450mg of magnesium per day can elevate testosterone levels up to 30%. Dr. Lorrie Brilla, at Western Washington University, reported that these minerals significantly increase free testosterone levels and muscle strength in NCAA football players.[2]  Dr. Brilla reported that during an eight-week spring training program athletes had 2.5 times greater muscle strength gains than a placebo group.[3]

“Magnesium is essential to a diet for people are under a lot of stress or want to experience the ultimate rush,” says Dr. James Thor, National Director of Extreme Sports Medicine. “Several reasons, one is if you are working out in a gym, or continual stress excessive amounts of lactic acid in the muscle have been linked to higher levels of anxiety,” Dr. Thor adds. Large amounts of magnesium are lost when a person is under stress and when magnesium chloride is applied to the muscles topically it promotes the release of lactic acid from the muscle tissue.

Maximal contraction of the quadriceps is
positively correlated to serum magnesium status.[4]

Magnesium is the single most important mineral for athletes. Adequate magnesium level will help against fatigue, heat exhaustion, blood sugar control, and against sudden death through cardiac arrest. Increased energy expenditure causes an increase in magnesium requirements. Magnesium depletion and deficiency play a role in the pathophysiology of physical exercise.[5] 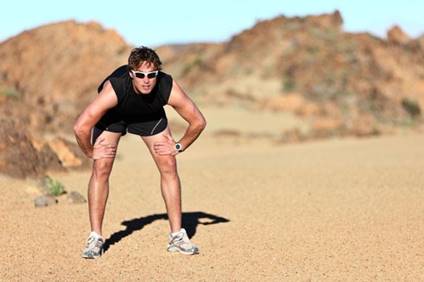 Before, during and after training, full hydration is crucial! Not only does performance decrease in case of a fluid shortage of 2%, but also in cases of greater deficit, there is a real risk for overheating and problems with the blood circulation. The adding of electrolytes does not only ensure a better functioning of the muscles, it also stimulates your thirst, which urges you to drink sufficiently.

It has been reported that 2-4% of all the oxygen we consume turns into toxic free radicals, which can damage the mitochondria.  This is significant for athletes who breathe a lot more oxygen than sedentary individuals do.  In addition, the percentage of free radicals increases during high exercise intensity.

If the mitochondria become compromised due to the millions of free radicals, they will not be able to maintain the needed ATP production rate for exercise. This causes the body to use glycolysis for its high ATP needs. When this occurs more lactate (lactic acid) is produced, which means fatigue will quickly set in more quickly.

So free radicals are not only liked to diseases like cancer and neurological diseases, but also to fatigue, muscle damage, and slow recovery.

Hydrogen Enriched Water can be the key to sports performance, recovery, and health. Molecular Hydrogen, the primeval antioxidant, is the smallest molecule in the universe (90 times smaller than vitamin C, even smaller than oxygen), which allows it to rapidly diffuse through the cell membrane and into the mitochondria where it can help eliminate the toxic free radicals.

“Iodine deficiency sets a cascade of energy-depleting effects in motion,” writes Dr. William Davis. When thinking about thyroid hormones and athletic performance, you should first think about energy and its importance in athletic events. Hallmarks of thyroid deficiency are fatigue and low stamina, not something you want to find yourself plagued with when looking for high performance.

Although replacing iodine is critical for everyone, athletes in particular especially need to replace iodine because it aids in hormonal regulation and the release of cortisol during times of stress. Peak energy demands iodine sufficiency.

Endurance and competitive sports and intensive power training requires optimal, balanced nutrition as they place heavy demands on the body. Good nutritional practices should be part of every athlete’s normal daily routine. Nutrition is one factor that every athlete can control and maximize to achieve the highest potential for performance.

Having the right long-run nutrition plan can make the difference between finishing strong and not finishing at all. Many runners rely on sports drinks (Gatorade, Powerade) and gels (PowerBar Gel, GU) for their carbs but none of these products offers high quality concentrated nutrition.

Concentrated nutrition can put rocket fuel in your blood. One proven source of high octane nutrition is spirulina. A team of Greek researchers investigated the effects of spirulina on running performance. Nine moderately trained male subjects received either supplemental spirulina or placebo daily for four weeks. Before and after this intervention, all of the subjects ran on a treadmill at 70-75 percent VO2max for two hours and then at 95 percent VO2max to failure. On average, subjects were able to run more than 30 percent longer after spirulina supplementation.

A relatively new option is liquefied seeds that come in one and two ounce packets that are easy to consume even when on the run. The following are two testimonies from athletes who are using liquid seeds. One of the products used even has spirulina.

Sugar is the number one cause of blood congestion, general inflammation and lower oxygen delivery. “When red blood cells clump together, oxygen delivery is reduced, resulting in fatigue,” says nutritionist David Parker. Sports performance is compromised by high sugar intake because it cuts down on oxygen delivery to the cells. The concentrated super nutrition that I recommend below coupled with molecular hydrogen work powerfully to not only reduce inflammation but also help to space red bloods cells out appropriately.

Whatever your level of sporting achievement far–infrared therapy is going to be a great help and comfort. Daily and nightly treatments on an infrared mattress, at home, offers pain relief after strenuous workouts and offer athletes a safe, fast return to peak performance.

* Increases the extensibility of collagen tissue.

* Assists in resolution of inflammatory infiltrated, edema, and exudes.

* Enhances the delivery of oxygen and nutrients in the blood cell to the body’s soft tissue areas.

* Increases metabolism between blood and tissue.

* Removes accumulated toxins by improving lymph circulation which are often at the core of many health problems.

* Stimulate the hypothalamus, which controls the production of neurochemicals involved in such biological processes as sleep, mood, pain sensations, and blood pressure. 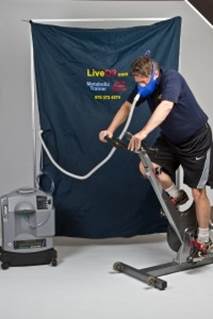 Extra oxygen increases muscles’ energy production improving athletic output ability; intensity and duration. Athletes know very well that they can quantitatively improve their performance by training at high altitudes. The secret to Olympic success is higher concentrations of oxygen delivery to the cells and until recently to do that they had to live at high altitudes and train there. That is no longer necessary. One can now train comfortably in one’s own bedroom with Live O2 therapy, which comes in two forms, the basic and the simulated high altitude training. Oxygen-rich blood is one of the most important components for sports performance.

Increasing the amount of red blood cells and making sure they are of the correct shape and have appropriate space between them increases the oxygen carrying capacity of the blood to deliver more oxygen to exercising muscles. Heavy magnesium supplementation is essential in this.

[3] Pre and post leg strength measurements were made using a Biodex isokinetic dynamometer.” The strength of the ZMA group increased by 11.6% compared to only a 4.6% increase in the placebo group.