Bizarre reports of weather extremes continue to come in from all over the world and there is no one anywhere telling the public why we are seeing such violent climate change. Officials are again hitting the global warming button quite hard but we really do not know what is going on and why. Extreme weather events are hitting human populations around the globe with no sign of any letup.

The year 2010 was one the worst years in world history for high-impact floods. But just three weeks into the New Year, 2011 has already had an entire year’s worth of mega-floods. – Meteorologist Jeff Masters

We are witnessing terrible flooding occurring in country after country, particularly hard in Italy and France as of late and it’s not clear how much longer insurance companies can keep paying for claims. Even the United States government is running out of emergency funds and has trouble voting in more. And when the funds are voted in, it is not real money that is available to repair damages and help disaster victims. It’s funny money, almost counterfeit because it is created out of thin air with more debt creation.

The Associated Press printed: “Nature is pummeling the United States this year with extremes, with insurance companies paying out record-breaking amounts.” Floods are wreaking havoc around the world; cold is setting in early, promising a long cold winter in the north, volcanoes are continuing to blow their tops spilling huge tonnages of gasses and ash, which alone hold potential to lower world temperatures further.

The water is certainly coming from somewhere and according a NASA report, worldwide rainfall and snowfall were so extreme in so many places last year that sea levels fell dramatically. Sea levels have been rising steadily for over a century (some debate this assumption) as the ever-warmer ocean water expands and the world’s remaining glaciers and ice sheets melt. In fact sea levels were thought to be rising twice as fast now as they were a few decades ago but now we have had an almost instant turnaround. Nothing in the modern satellite record comes close to the 6 mm drop worldwide last year. While 6 mm might not sound like a lot, when collected from the surface of all our planet’s oceans it adds up to 26,000 gallons of water per human.

Tiny changes in the earth’s cloud cover could account for variations in temperature of several degrees, most climatologists believe, so this could explain what we are seeing with intensifying rainfall. The amount of ultra fine condensation nuclei (UFCN) material depends on the quantity of the background drizzle of cosmic rays. Normally this quantity varies depending on the strength of the sun’s magnetic field and the strength of the Earth’s magnetic field. But lately there seems to be an unexplained increase in cosmic rays and this is troubling scientists.

Recently at the South Pole increased levels of cosmic rays have been detected crashing into the Earth and they appear to be coming from a particular location rather than being distributed uniformly across the sky. Scientists know of no source close enough to produce this pattern. “We don’t know where they are coming from,” says Stefan Westerhoff of the University of Wisconsin-Madison. It’s a mystery because the hotspots must be produced within about 0.03 light years of Earth. Further out, galactic magnetic fields should deflect the particles so much that the hotspots would be smeared out across the sky. But no such sources are known to exist.

Humans must stay within certain boundaries if they hope to avoid environmental catastrophe, a leading group of environmental scientists has recently said. Crossing those limits may not rock the Earth itself, but would lead to harsh consequences for human existence on the planet as we know it. It does seem like we have crossed that boundary and have done so very quickly. In 2011 natural disaster has been the rule not the exception with flooding taking first place in how Nature is striking at us. 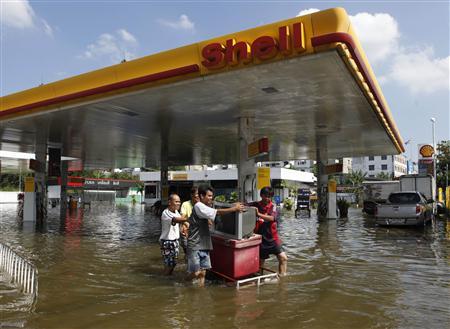 All one has to do is look around to witness the world drowning in floods. Thousands of Bangkok residents flocked to bus, rail and air terminals in an exodus from the mass of floodwater that hit the city. Water was seeping into central areas of the city of 12 million people, entering the grounds of the Grand Palace after the main Chao Phraya river overflowed at high tide. The floods forced the closure of seven industrial estates in Ayutthaya, Nonthaburi and Pathum Thani provinces bordering Bangkok, causing billions of dollars of damage, disrupting supply chains for industry and putting about 650,000 people temporarily out of work.

Over 700 people have been killed and eight million affected by heavy flooding across Southeast Asia. Torrential rains have pelted Thailand, Cambodia, Laos and Vietnam, cutting off roads and destroying homes and crops. At least 900 factories have been shut in Thailand because of the flooding, many of them auto-parts manufacturers.

On October 31, 2011 about 1.8 million people in at least five states remained without power after a rare October snowstorm buried parts of the Northeast under more than two feet of snow. On the 25th more than 90 people were counted dead from heavy rains pounding Central America after Guatemala reported more people swept away by raging floodwaters and Costa Rica found four drowned. An estimated 700,000 people were displaced by floods and landslides following as much as 120 centimeters (47 inches) of rain in the past week in some areas – three times the monthly average this season – officials said. The week before had people killed by a week of torrential rains in El Salvador.

At least nine people have been killed and five others are missing after flash floods hit the Italian Riviera turning roads into rivers and washing cars out to sea. Two people were swept away in floodwaters when torrential rains created rivers near Costa Blanca. And Dublin’s officials began the onerous task of piecing the capital back together again on Tuesday after a torrential downpour the day before swelled the city’s main waterways, causing them to burst their banks. Water spilled over into the streets, and the flooding quickly prompted Dublin’s City Council to enact its “major emergency plan.” 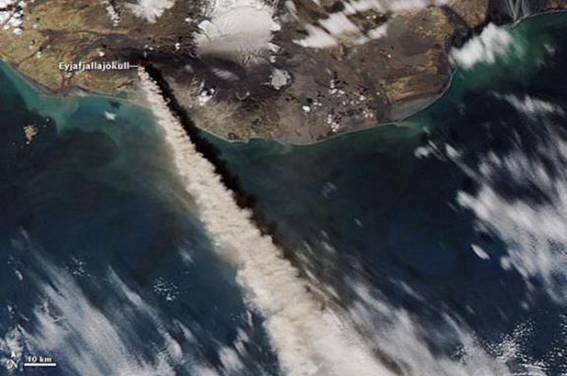 Volcanic eruptions affect the Earth’s climate more than thought by releasing far more weather-altering particles than scientists’ suspected, new research finds. Researchers have analyzed how many secondary particles of volcanic ash generates and how this ash reacts chemically with other components of the atmosphere. The particles created from the eruptions are mostly composed of sulfuric acid.

If sulfuric acid particles become large enough, they act as seeds for cloud formation. Clouds, in turn, can alter the amount and type of precipitation an area receives. The atmospheric data the researchers collected during the Eyjafjallajökull eruption suggest that volcanic eruptions can release up to 100 million times more ash particles than thought. In addition, seeding particles can form at lower altitudes and farther distances from volcanoes than past studies had suggested.

“Most previous studies did not properly account for low-altitude impacts of volcanoes,” researcher Julien Boulon, a physicist at the Laboratory of Meteorology Physics of the French National Center for Scientific Research and Blaise Pascal University in Aubiere, France, told OurAmazingPlanet. The findings, detailed online on July 11 in the journal Proceedings of the National Academy of Sciences, point to the potentially broader climate influence that volcanoes could have.

Whatever is governing these extreme climate events will hit us emotionally and in fact we do find survivors of disasters facing a considerable amount of post-traumatic stress. The worst danger though is to the world’s agricultural system, which is taking a beating from the flooding as the human race breaks through the seven billion mark. Even before this year’s record disasters, world food stocks were getting dangerously low. The poor peoples of the world are paying more dearly for their food as a result, meaning many are eating less.

Life is hard and has always been so for most of humanity. Certain moments in history are harder than others and of course it always depends on where and who one is. Today the entire fabric of is changing threatening us. We have entered one of the most difficult and perhaps dangerous periods of our existence; and it comes after 60 years of television and the easy life for too many people who will not do well when the going gets tougher.