Deep within the heart of western medicine is a wisdom and power that is deliberately stymied by medical authorities and the pharmaceutical companies that stand behind them. Inside the emergency room and intensive care wards, where many believe some of the most accurate medicine is practiced, are common but extraordinarily safe and effective substances that save lives every day. Interesting no one has thought to harness these medical super weapons against chronic disease and cancer.

These strongest natural medicines can be used at home many times a day at high enough doses to safely effect strong changes in a person’s medical situation, even if they are at or near death’s door. This natural not pharmaceutical. One can apply these lifesaving medicinals around the clock at home orally, transdermally (topically), and via nebulization, enemas, feeding tubes, baths and even intravenous methods if a nurse is available. These substances all heal through fulfillment of nutritional law.

These kinds of medicines address the root causes of disease, the basic causes that are fundamentally the same for everyone no matter what the symptoms or how each person’s disease manifests. Low oxygen and carbon dioxide levels, nutritional deficiencies, chemical poisoning, radiation exposure, pharmaceutical drug toxicities, emotional trauma and stress, dehydration as well as high-sugar diets and lack of exercise are common causes of chronic disease that drugs, surgery, chemo and radiation therapy do little or nothing to address.

Sodium bicarbonate, a common emergency room medicine, acts as a powerful, natural and safe antifungal agent, which when combined with iodine, covers the entire spectrum of microbial organisms. The efficacy of sodium bicarbonate against certain bacteria and fungi has been documented but its role as a disinfectant against viruses is not generally known. Sodium bicarbonate at concentrations of 5% and above was found to be effective with 99.99% reduction of viral titers on food contact surfaces within a contact time of 1 min.

In the emergency room and ICU medicines have to be safe while delivering an instant lifesaving burst of healing power. Obviously if they are safe and strong enough for emergency situations they are going to help us with chronic diseases and acute ones as well.

Research suggests that administering sodium bicarbonate in intravenous (IV) form can significantly improve pH and Pco2 in children with life-threatening asthma. Respiratory distress and level of consciousness both improved after the administration of sodium bicarbonate. 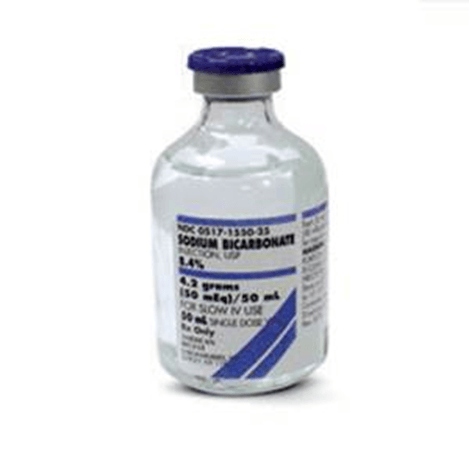 Sodium Bicarbonate Injection: USP is administered by the intravenous route. In cardiac arrest, a rapid intravenous dose of one to two 50 mL vials (44.6 to 100 mEq) may be given initially and continued at a rate of 50 mL (44.6 to 50 mEq) every 5 to 10 minutes if necessary (as indicated by arterial pH and blood gas monitoring) to reverse the acidosis. Caution should be observed in emergencies where very rapid infusion of large quantities of bicarbonate is indicated. Bicarbonate solutions are hypertonic and may produce an undesirable rise in plasma sodium concentration in the process of correcting the metabolic acidosis. In cardiac arrest, however, the risks from acidosis exceed those of hypernatremia.

A recent Cochrane Review updating their 2009 conclusions on measures taken during cardiac surgeries to prevent post-operative atrial fibrillation or   supraventricular tachycardia  looked at one hundred and eighteen studies with 138 treatment groups and 17,364 participants. Fifty-seven of these studies were included in the original version of this review while 61 were added, including 27 on interventions that were not considered in the original version. Interventions evaluated included amiodarone, beta-blockers, sotalol, magnesium, atrial pacing and posterior pericardiotomy. The use of magnesium preventively showed a reduction in the rate of atrial fibrillation, a decrease in the length of hospital stay and cost of hospital treatment and a possible decrease in the rate of stroke.

When it comes to the use of medical gases this site sports the breakthrough medical idea that hydrogen should always be used with oxygen in all situations, with special attention paid to CO2 levels in the blood.